Win Some, Lose Some


I learned an important lesson today about perseverance. I happened to speak to a friend by phone when I was almost at the top of Lose Hill, and admitted that I didn't have the legs to make my last planned peak.

At the last minute I changed my mind and went for it. It was hard, but the elation that I'd felt last Saturday had been missing -up until the point where I'd nearly made it to the top of the apropriately-named Win Hill. You value something so much more when you've had to put doubts to one side and work hard for it.

I started the walk at Ladybower Reservoir. Severn Trent Water have put a free car park by the dam, with some of the best public toilets I've seen, which is important when you've just done a 2hr drive to get there and are facing an 8hr walk.

The dam is really quite impressive. 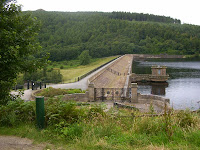 For the first couple of miles I followed the Derwent Valley Heritage Trail, which is fairly level, and reminds me of some of my local cycle routes and canal walks. When I noticed a village on the map called Shatton, I had to include it in the walk. Despite its name, it's a very pretty village. There's an Upper Shatton and Shatton Moor. 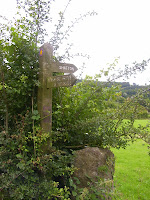 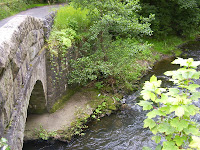 After Brough, there's a Roman fort. I love these, you can really feel the history around you and under your feet. I assume that the stony bit is the remains of the Roman wall, and that the rusty barbed wire is much more recent. 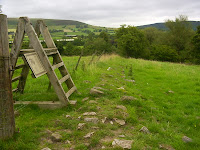 Hope has this very interesting church in a beautiful setting. I think Dive might confirm that's a broach spire. 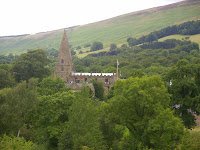 After Castleton, came the quite spectacular Cave Dale. This was the first real cimb of the day, and in fact took me up to 400m which was most of the work done for the later peaks. 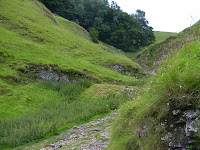 I picked up a little bit of the Limestone Way here, which to be honest, wasn't as spectacular as It had sounded, that is until Mam Tor came into view. 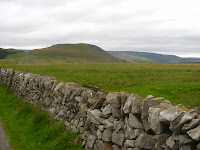 It was quite busy - there's a car park close by allowing people to just climb the last 60m up some stone steps. It has an unusual stone trig point: 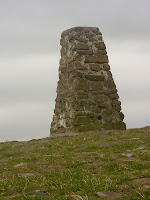 After Mam Tor, the next couple of peaks come into view, with this anti-erosion flagged path which gives the impression of a giant backbone across the landscape. The pimple on the horizon is Win Hill, my planned final peak. It looked so far away! 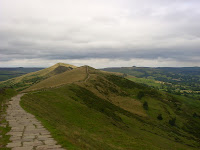 I was delighted to spot Castleton down below. If you enlarge this picture, Peveril castle is in the middle, and just below it to the left is Cave Dale, which I'd used earlier. 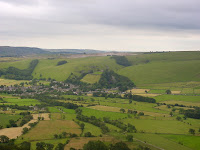 Lose Hill doesn't have a trig point, but does have this little monument. It has compass points engraved on it, along with the names of all the peaks that you can see in the various directions. In the distance of this picture is Win Hill. I had decided by this point that I couldn't manage it, which was disappointing. From Mam Tor to Lose Hill, the peaks are in a line with not much of a dip and climb between them, but getting from Lose Hill to Win Hill meant descending to 170m before climbing back up to 460. I sat here with my map, fending off the sheep which were trying to eat my cake and my rucksack, and picked out a route which would get me back to my car directly and with no more ascents. 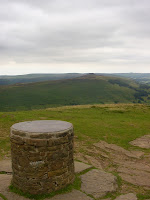 However, once down in the valley, I spotted a fingerpost pointing to Win Hill, and the path looked more gentle than I'd imagined earlier and so I couldn't resist going for it! There were about three hours of daylight left, and I had to take a chance that the car park didn't have a lock-up time. I felt that even if I got to the point where I had to rest every few steps, it would be worthwhile.

These are two of my favourite pictures of the day - this is a view back on Lose Hill after starting the climb to Win Hill. The heavy sky makes it look so dramatic. 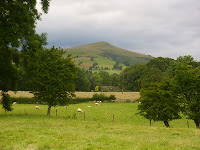 And this is a great view of the earlier peaks - Mam Tor over to the left, Hollins Cross in the middle and Lose Hill on the right. 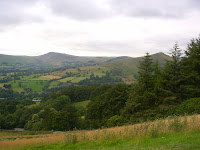 This is the point where I really started to feel good. Winhill Pike is just a few minutes away. Despite being alone, I laughed (possibly more from delirium than elation). 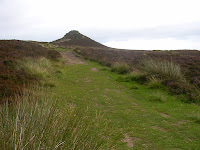 The 360 degree view from up here is spectacular. I could see everything I'd done today, plus lots more unexplored Peak District to the north. This snap of the trig point has my starting point, Ladybower Reservoir, down below. 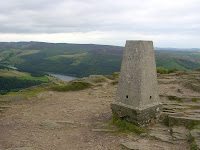 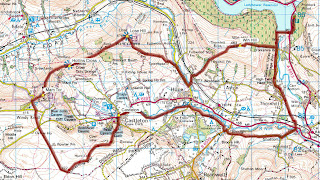 Wow!
What a great walk, Pea!

And never mind the broach spire; I'm still reeling from the fact that there is a place called Shatton!
G'yak.

Sorry to repeat but what a great walk. Glad your legs lasted to reach your planned peak. Superb pics, just make me want to be there. Well done.

Dive, the Ordnance Survey can be a most amusing read! What I didn't say was that in that very village I saw a house nameplate inscribed 'The Shieling' - anyone who knows about the affected spelling of my name will understand why I laughed.

Whippetsgalore, I'm chuffed to bits to see that you've got to grips with the black art of commenting on blogger! The great news is that you can be there too, any time you like. The guest bed is made up!

And hi, Joan! Whippetsgalore is such a cool name!
Kinda like Pussy Galore with whips … er … perhaps not. hee hee.

Great walk Pea, you are so good, you know how far Dive walked me in London, he called it a stroll...

And whippetsgalore, I never got around to answering her e mail, hope she forgives me, often think of her and dad......and always think of you.. xxxxx