I've now done this walk 3 times. In fact it was the very first post on this blog in August 2006. It's the kind of distance that takes most of a day to do, but the feeling of achievement at the end is amazing. There's some nice countryside and some nice views as a further reward.

The walk starts in Burton on Trent, the home of Marston's Pedigree (it says here). There are many brands of beer that have their roots in Burton, but Pedigree is indeed good stuff. It's the water from the river Trent, I'm told. That's hard to believe if you've seen (or paddled in) the Trent. 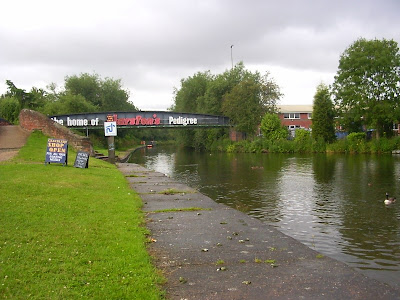 The first part of the walk is along the Trent and Mersey canal. There were so many geese around, we named today the Burton Goose Fair. 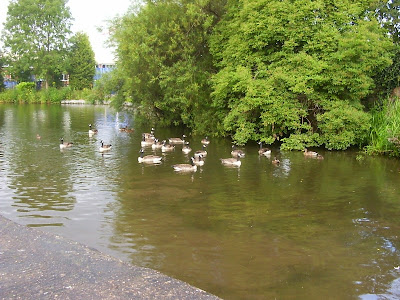 The Buddleia (or butterfly bush) grows so easily and quickly here in England, that it's often overlooked as the attractive, intensely-coloured and beautifully-scented plant that it is. When it's in full flower on a summer day like this one, it's surrounded by a cloud of butterflies and bees. 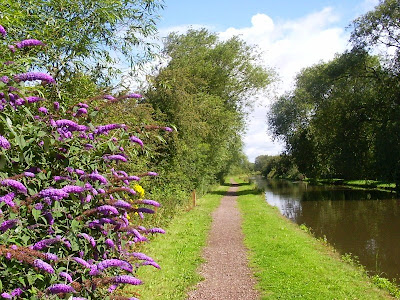 I'm not sure what this is. Some kind of rose, I guess. It also looked quite special against the blue sky. For the record, today's weather was what the weatherman calls 'sunshine and showers'. We got wet several times, but in between it was warm and sunny. 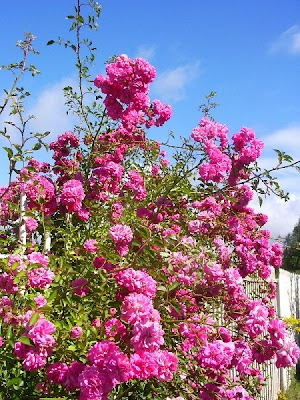 This wood has the odd name of the 'Fagness'. Rog nicknamed it 'His Royal Fagness'. I don't know who he had in mind. 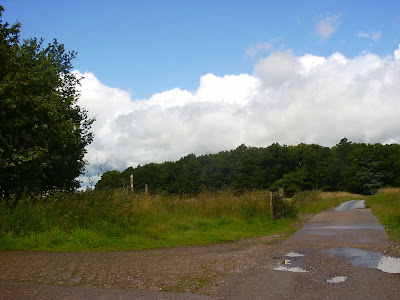 Conkers are taking shape but still quite small. 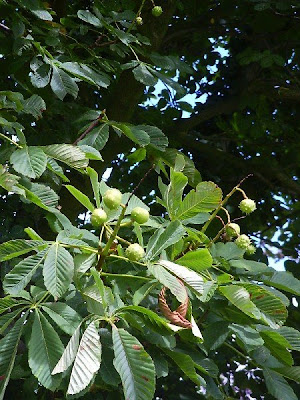 This big steamy pile of manure has been dumped right across the public right of way. If I were more cynical I'd suspect that the farmer had put it there deliberately. I've seen this kind of thing a few times, it's hard to believe it's accidental. (We walked around it with care.) 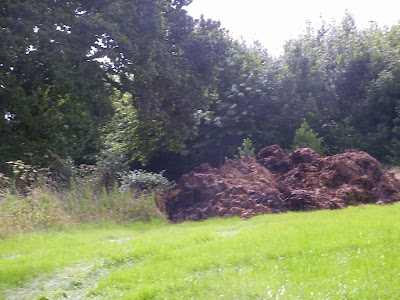 I find this view quite amazing. In the centre of the picture in the middle distance is Willington Power Station which I've mentioned before. Ugly, but now a familiar landmark. In the far distance on the horizon is Ratcliffe on Soar Power Station. Ratcliffe is just beyond the eastern boundary of South Derbyshire, while the Western edge is somewhere between Willington and the spot this photo was taken. Therefore we can see the whole width of the South Derbyshire district in this shot. 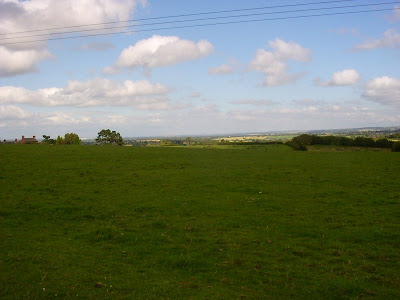 I love wild flowers. It's easy to dismiss them as weeds because they spring up uninvited, but there are some beautiful shapes and colours. These daisies looked so attractive growing among the wheat here. 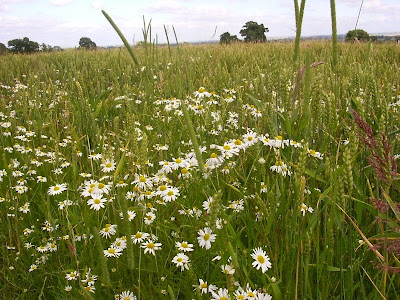 I believe that you can't eat an animal if you've given it a name, but these girls are probably looking at a long life providing milk and having calves. They've all been given girls' names. This is Lucy: 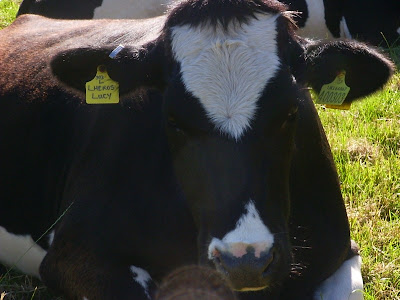 And this is Niki: 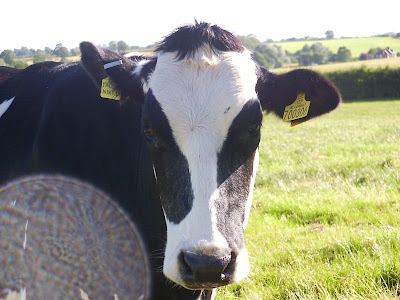 And this is Burton once more. I'm not a fan of any man-made development, but from up here it looks quite awesome. After 26 miles, knowing the car is down there makes it look very appealing too! 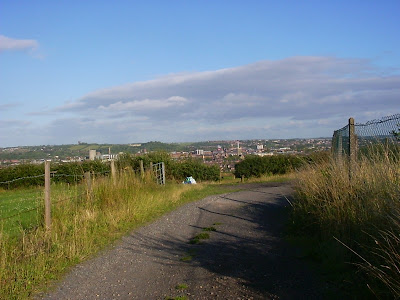 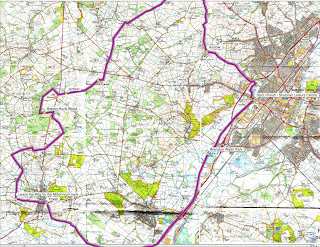 The route above was generated using Meander and scanned OS map.
Posted by peahen at 9:46 AM 1 comment:

Email ThisBlogThis!Share to TwitterShare to FacebookShare to Pinterest
Labels: East Staffordshire
This is a very nice walk which takes you past what might be a farm or might be a zoo. It's very strange to see a cow grazing near to its more exotic cousins in the next field. 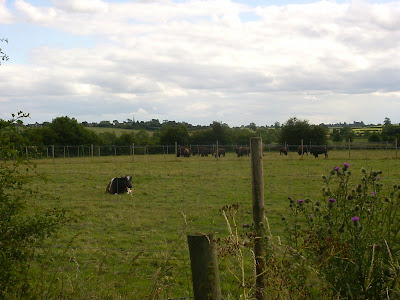 Nearby are llamas, and these deer. 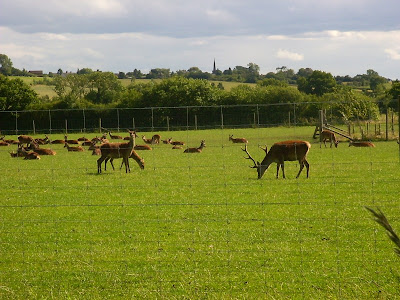 Flowers are fewer and farther between now, but in this hedge I saw blackerry and dog-rose flowers, which are remarkably similar when you see them side by side, alongside honeysuckle. 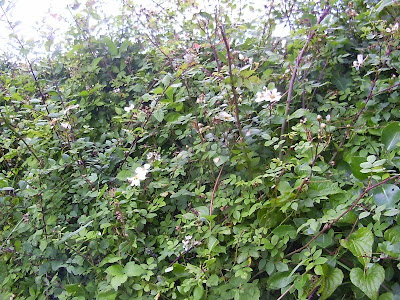 I found this large mushroom in one of the fields. Yum. 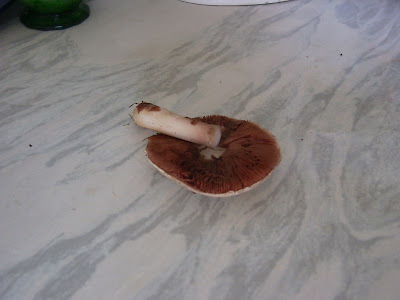 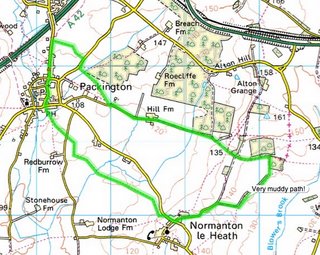 Some classic South Derbyshire views, taken before I did my usual stupid acrobatic jump over a stile, landed badly and walked several miles on a sore ankle. That gave me a reasonable excuse to get a lift home when it started to rain.

This is a very pleasant walk. As far as pretty villages go, I love Smisby, the views from alongside the Ashby by-pass are superb, and the part of Ivanhoe Way from there to the Ferrers Craft Centre is one of my favourite local routes.

The derelict cottage is covered in elderflower, a fragrant flower which some people still use to make cordial and more importantly, white wine. I have collected mine this weekend. Later in the year the berries also make wonderful red wine. I've also seen someone eating the leaves in sandwiches.

I love this cottage as an example of nature very quickly reclaiming its land. 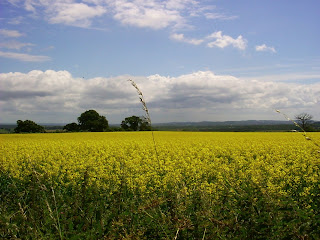 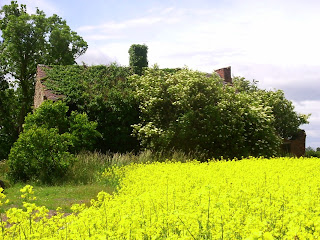 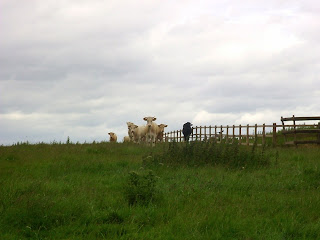 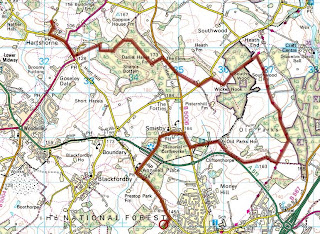