What could be a better way to spend an August bank holiday monday than covering 26 miles of Staffordshire? (Midlands, UK). The title given to this walk relates more to the time of year than the geography of the route - we probably managed the government's 5-a-day for the next month - the total bounty included Damsons (a delicious small blueish plum), mushrooms (I was very dubious to start with, but I'm still alive, and picked straight off the ground they were tastier and better-looking than shop-bought ones), apples (a bit sour), walnuts (not quite ripe and not eaten on route!), hops (interesting to see how bitter gets its bitter taste!), sloes (not really edible, but great for making sloe gin) and of course blackberries, which were permanently within reach.

Showers were a little bit more plentiful than the bbc had led us to believe, but our reward came near the end of the walk in the shape of the strongest most spectacular rainbow I've ever seen, like some kind of divine finishing post!! 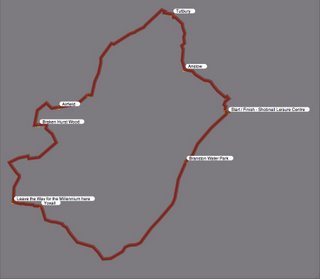 The route above was generated using Meander. I'm heistant to publish the route complete with the map because of Ordnance Survey's licensing, but if you'd like the route superimposed on the OS map as a jpeg or in Meander file format, just email me.