This evening was the first time this year that it's been possible to go walking after work (without a torch), and the first time that the weather was pleasant enough to give that very contented feeling. Mmmm. 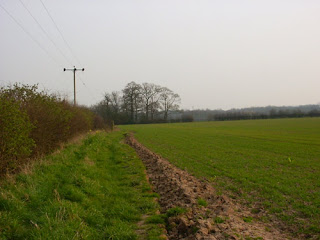 This walk continues my efforts to walk parts of the Ivanhoe Way ahead of doing the whole walk in one day later in the year. It starts at Snarestone, which is the spot I parted company with the Ivanhoe Way last time out. I followed the IW to Odstone before heading off towards Swepstone and forming a circle back to Snarestone.

The first km from Snarestone crosses some pleasant meadows, before 'dog legging' across a lane. Then some more fields before joining a road. It's a very quiet and pretty road, though. 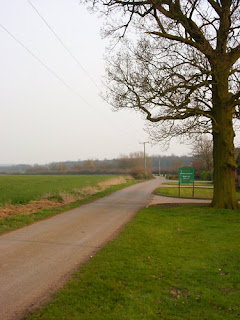 Looking around I was struck by how flat this part of the country can be. Unusually for Leicestershire, the next stile is not very easy to spot - it's there to the right of the picture: 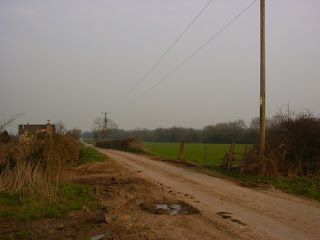 Once over that stile, the path joins the canal. I love canal towpaths! They're beautiful, flat and good underfoot. 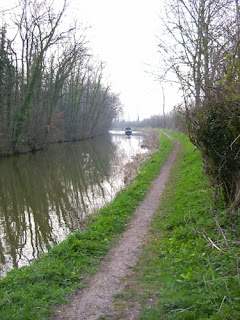 Just a short stretch of this brings us out on another road, where I had planned to leave the Ivanhoe Way.

My big mistake of the evening was to leave the IW here. I did so because it disappears off the bottom of the map that I had with me (Explorer 245), and while Leicestershire is fantastic with its maintenance of its yellow waymarkers and fingerposts, I wouldn't trust to those without a map. The shortcut I took, which was both marked on the map and signposted with a green fingerpost, crossed a field of horses with an electric fence across the entrance and exit. I'm very cautious with these now (see traumatic experience 2 or 3 posts ago), and so did some deft limbo'ing on one side, and careful straddling the other. I then had to climb over a fence (thanks Mr Landowner) and through a farmyard and very muddy path before picking up the good path which is shared by the Ivanhoe Way and Leicestershire Round. (Note to Self - stick to Ivanhoe Way here, and write to Leicestershire CC about the electric fence!)

There then followed quite a climb, but the view from the top of this hill is quite something. This evening was very pleasant, but a little misty, and so the views were spoiled a little. 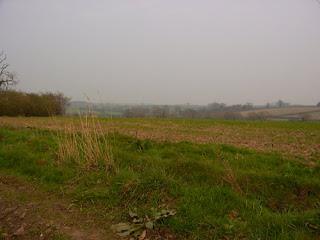 The villages Odstone, Newton Burgoland and Swepstone are all very pretty and idyllic. This walk passes through all 3 by road, but again, it's a quiet road with verges in places. 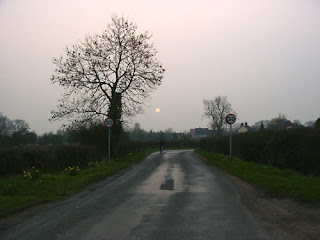 There is something particularly appealing about Swepstone Church. what makes it better still (I went to a Christening there recently) the minister is Patrick Stewart (or perhaps a lookalike). I passed this Church during the last walk, and this time I picked up the same path and followed it back to Snarestone. 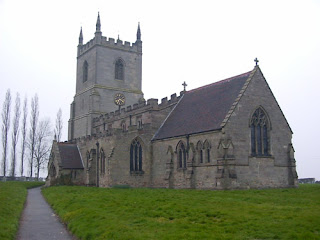 The stats and route below were generated with Meander. 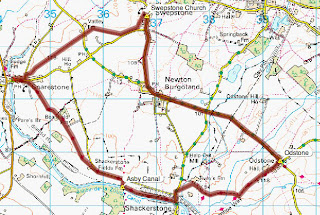 Email ThisBlogThis!Share to TwitterShare to FacebookShare to Pinterest
Labels: Ivanhoe Way, Leicstershire Round

I felt smug walking part of the route I'd normally take to work, and on a normal work day too! The day wasn't particularly nice, though. Someone I bumped into on the way commented "nice day for it". I said that I didn't think it was, as it was threatening to rain. (This obsession with the weather is very English, but it's relevant when you're walking and miles from home, I reckon). He said that you have to "think positive". If I could control the weather with the power of thought, then I'd be a lot wealthier than I am.

This troubled me for the rest of the walk. If I had "thought positive" and it had rained (which it didn't), then I'd have felt worse than if I'd been expecting it. If I'd thought happy weather thoughts and the sun had come out, then there might be a danger that I'd have associated the two somehow. This is very dangerous ground, I reckon - religions start this way.

Anyhow. The really great news is that I spotted leaves coming out in the hedgerows today. It's been a little strange over the last week or two, with snowdrops and daffodils flowering away, but the hedges and trees still bare. 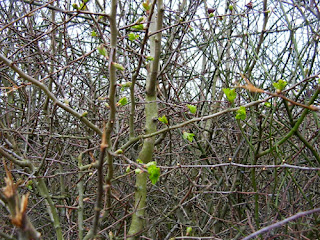 We start by walking through a part of the National Forest which affords some nice views back over Ashby de la Zouch and the surrounding area.

This is Ashby Canal and Moira Furnace - now a tourist attraction with a really great story. The furnace (the tapered bit with the arched 'windows') only ran for a couple of years before 'melting down'. After that, the imposing building was used to accommodate mine workers and as a worksop to cast iron. Note that it now has its own visitor centre with a coffee shop which sells ice cream! 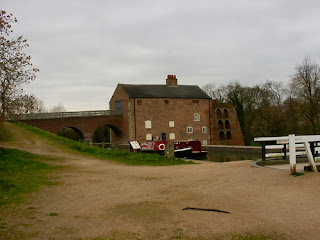 After passing the furnace, we join the Ivanhoe Way, which is the reason for doing this particular walk today. Last year I had planned to walk the entire Ivanhoe Way in a single day (36m) but wasn't ready before the longest day, and lost heart. I'm going to try again this year, and have decided to walk parts of it while training because familiarity with the route is important for a challenge like this.

This part of the Ivanhoe Way follows national cycle route 63. I love walking cycle paths and canal towpaths because they're so easy to follow, flat and good underfoot.

The cycle route takes us to Measham. Even with map in hand I found it difficult to follow the Ivanhoe through Measham, so for the record, you emerge from the cycle path into a car park, cross the road and carry on into the side street by the convenience store. You could walk through the housing etsate as per the map, but I took a slightly nicer route through the park area and climbed the embankment to cross the old railway bridge. Once across the top of that bridge there are fingerposts and yellow waymarkers visible.

There's a short walk along a road to Snareston, which is a very pretty village, and then we cross fields to Swepstone.

In the distance is the church at Swepstone, looking majestic on top of its hill. 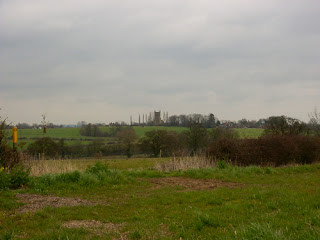 Leicestershire County Council, please take note - this situation isn't unusual, and it's really annoying! Which side of the hedge am I supposed to walk?? I can tell you from experience, that sods law says that you'll pick the wrong side, and then find yourself down a 'blind alley'. In this case, the sign seems to suggest (if anything) that you should go to the left (as we're looking at it). The map seems to suggest that it's the right, and for the record, the map's right this time. 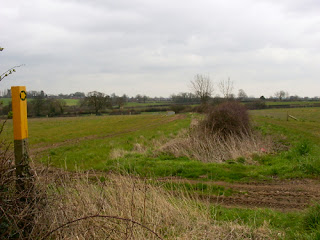 This is the church at Swepston. It doesn't disappoint. There are several churches on this route, but this one is particularly nice. 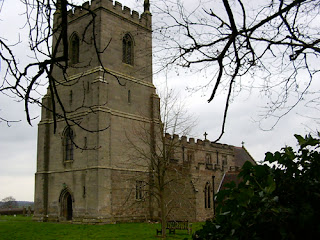 We're now on something called the Parish Walk (Note to self - find out more). It's a very nice path indeed - good underfoot, easy to follow and some nice views. 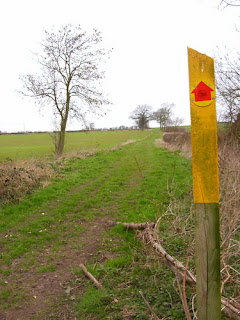 Crossing the A42 takes us back to Ashby. 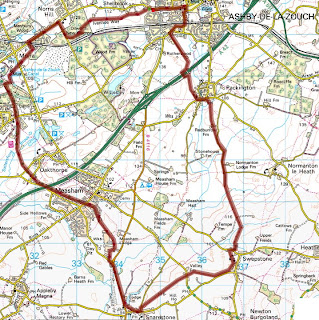 The less said about this one the better. The day was characterised by mud and going off-track, and more mud. Not a particularly nice walk.

Drakelow is the site of several cooling towers which have recently been blown up. It's the place where all of the powerlines converge: 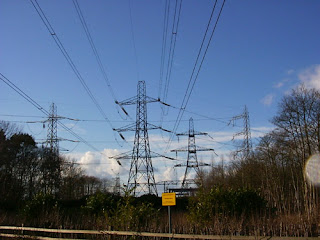 We also found this sage advice. I think that the one I touched last time out may have been connected directly to Drakelow Power Station. 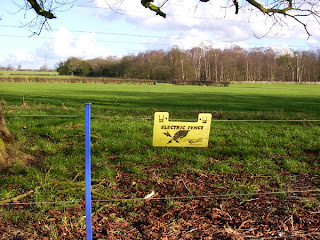