Stanage Edge - It's all too beautiful


For the background to this visit to the Peak District, see yesterday's post.

I'm very lucky to be within easy reach of the Peak District National Park. I found this walk on the Moors for the Future website. I chose it not because of the history, I'm afraid, but because of the ascents / descents and because it promised firm terrain, which is an important consideration after the huge amount of rain we've had.

Hathersage is very pretty town and ideal for starting and finishing. I extended the 5.5 mile walk by a couple of miles, because it was all too beautiful and I didn't want to leave Stanage Edge.

This pretty cottage near the start is Bronte Cottage. I'm really sorry, literature lovers, I love Jane Eyre as much as the next romantic fool, but today I was far more moved by the views than the history! That's Stanage Edge on the horizon. 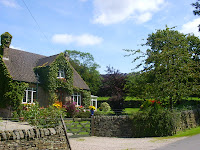 As I approached the Edge it started to look less like a fairly close dry-stone wall and more like the vast and distant rock formation it is. 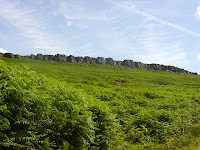 If you click to enlarge the photo below and look carefully, you'll see hundreds of folks with ropes clinging onto the vertical surface. Apparently, they come from all over the country to climb here. Fortunately for us walkers there's a path to the top. 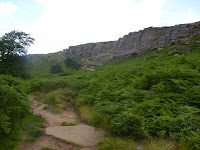 Having reached the top of the Edge, this fabulous rock formation was waiting for me. The District is known for its bizarre rock formations weathered out of the soft gritstone. 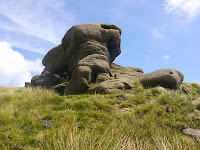 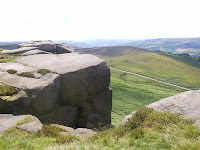 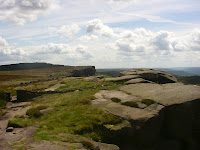 My ratty old boots are a matter of pride in a place where there's so much pristine gear walking around. However, they're really starting to come apart at the seams now, and no longer hold the water out. If you're a boot manufacturer and would like to donate a pair of Goretex size 8s in return for a review or your logo on this site, then I really am that shallow. 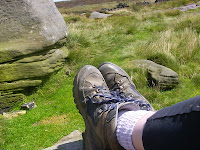 The planned walk leaves the Edge well before its highest point (trig point at 457m) and it was such a fantastic day that I carried on for a bit and planned a different route back to Hathersage.

Thank you to the stranger who took this photo. The sunshine was gorgeous, but it was extremely windy on the Edge, hence the horizontal hair and madly-flapping OS Explorer map in my hand. 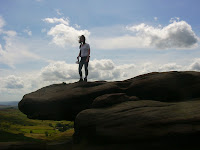 Once off the Edge, the moorland heather spreads out like a coloured blanket. Very pretty indeed. 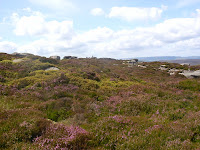 This is Higger Tor. I didn't go up there today, but will try to remember it because It looks as if it might afford a great view over Hathersage Moor. 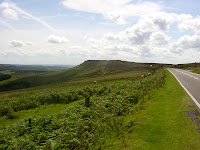 The purple line shows the planned route (the Hathersage route from Moors for the Future) and the green line is my extra bit: 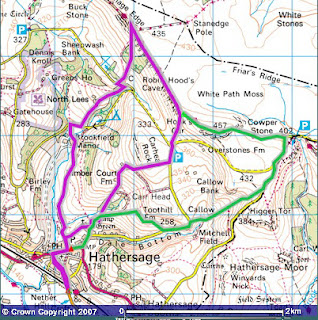 She emerged blinking into the daylight

The furthest I've walked during the last four weeks is from the office car park to my desk, which isn't far. I've lost my chance at the 2007 attempt on the Ivanhoe Way now; partly because of a full life and partly because of the monsoon season we've had instead of a summer this year. (Maybe next year!)

I saw a remarkable sight out of my window this afternoon - sunshine. That, coupled with my discovery of this site (during the course of my work, I hasten to add) filled me with the strong urge to be in the Peak District with my boots on.

My 6-miler around Ticknall seemed perfect for stretching the legs and shaking away the cobwebs ahead of visiting the Peaks tomorrow, so I emerged blinking into the sunlight and IT FELT GOOD!!!!! I've documented this route several times before, so here are some photos.

Sadly, there's a lot of wheat lying wrecked, presumably because of the deluge of water we've had, but it was good to see that plenty is still standing, and looking golden now. 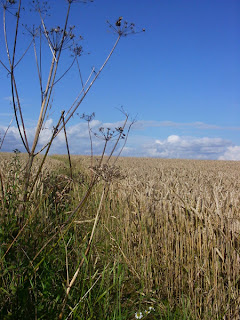 These are my first blackberries this year - it still feels a bit early, but very tasty they were. 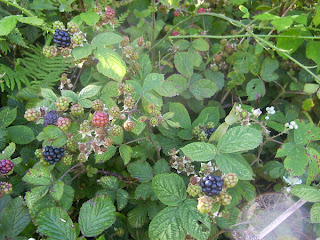 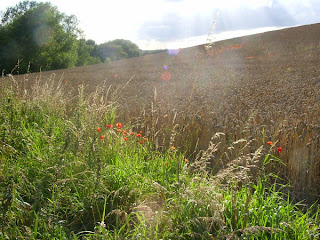 This is one of my favourite local views - looking across Foremark Reservoir. It looked particularly beautiful tonight 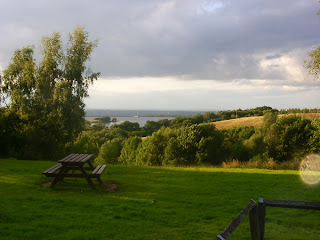