Here in the UK it's been getting dark later and later, and last night was the Summer Solstice - midsummer; the shortest night with the longest days.

A bit further north, folks would have experienced a 'twilight night' without complete darkness. Here in the midlands, the duskiness did give way to darkness, but only for a very short time, and the full moon kept it light. It was a wonderful experience watching the twilight go very slowly, and the dawn arrive very shortly afterwards.

The moon was very nearly full, and extremely bright. At one point when we were walking directly towards it, I had to shade my eyes from it. I don't remember seeing my own very distinct shadow in moonlight before.


I chose my '3 viewpoints' route, which I've trod many times, and I'm very familiar with now, but even so, I found that things look so different in the darkness!

I discovered a very funny game when it was quite dark. I didn't use my torch a great deal, but at one point shone it towards a black shape to see whether it was a cow, a straw bale or a bush. It turned out to be a cow, but the big surprise was seeing the two sharp points of light shining back at me! When you shine a torch into a field of animals, they look back at you and their eyes turn into bright spots of light. (Quick someone patent this idea - maybe it has a road safety application...)

It worked just as well with sheep, and when we found a field packed with a million sheep, to see all those pairs of eyes looking like fairy lights was a hilarious sight!

There are many nocturnal and crepuscular animals and birds; we saw owls and a badger, and heard so many rustles. In long grass we startled a partridge or pheasant which in turn startled me.

I started this walk tonight in a different place than usual, so that I wouldn't be walking through Melbourne at pub-turning-out time. I started just outside Melbourne, so it would be several hours before I hit 'civilisation' again.

At 11pm, the sky looked a beautiful blue, with a red horizon. It looks much darker in the photo than it did at the time. This is just before St Bride's farm, looking over at the Trent Valley. 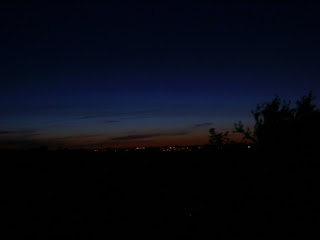 The first glimpse of the rising moon was around Hangman's Stone, between Seven Spouts farm and Foremark Reservoir. It started out a fairly warm yellowish colour, but soon became bright silvery white. This is around 12:15 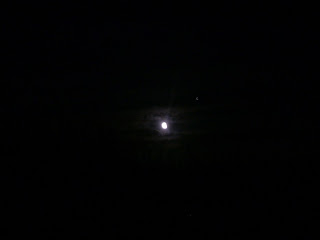 We crossed fields to Ticknall and by the Calke estate. This was the darkest part of the night, but it was still light enough to see without torches. By the time we first saw Breedon church, the morning's red glow was starting to appear on the horizon. Breedon church is somewhere in the middle of this picture on the horizon. 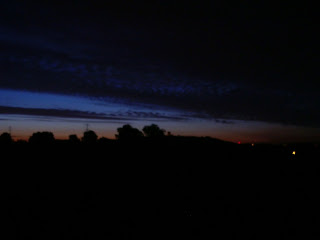 I've taken so many photos of Breedon Church, but not like these. It's floodlit, so can be seen from a long way away, and looks wonderful up close at night. 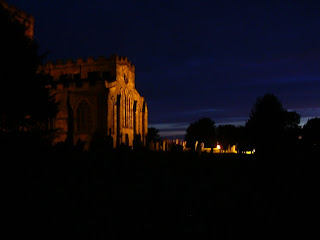 At this point, the horizon over to the East started to look very light. 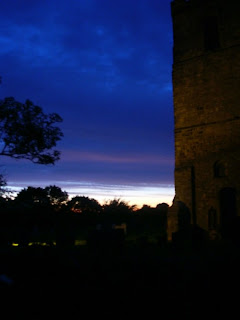 From now on, the light changed rapidly from the eerie half-light to full brightness. 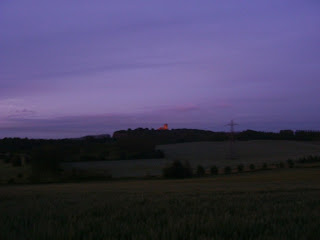 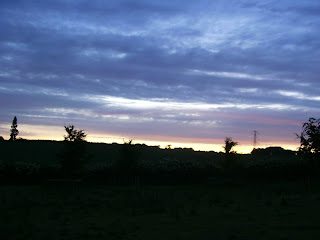 Having walked through Melbourne, perfectly light now at 4:20am, this is the red sky heralding the sunrise I don't remember watching the sunrise before. Having arrived back at the cars, the first glimpse of the sun was an intense spot of light on the horizon. In just a few seconds, this grew and grew, and the sun's rays filled one of my most favourite views. You can really see the sun rising very quickly over the horizon.

Having witnessed all of this, it's no wonder that ancient people were in awe of the daily and seasonal cycles of the sun and moon. 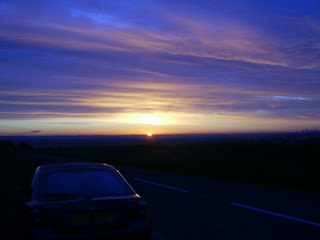 Today I walked my '3 viewpoints walk'. I'd normally take the distance in my stride, but today was really hot, and got really tired before the end.

this is one of my favourite views - from the south end of Staunton Harold reservoir. It looked particularly blue today, reflecting the gorgeous sky. 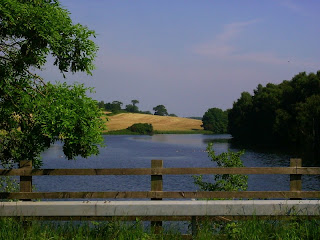 Today's theme was this pink flower. I think it's dog-rose and there was a lot of it about today. If I'm right, these flowers will be rose-hips later in the year. 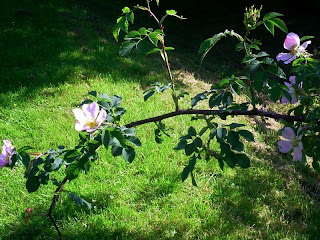 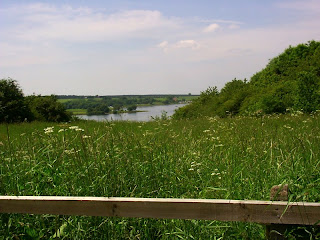 This sign makes me laugh at this time of the year! It was scortching hot today - but watch out for the ice!! 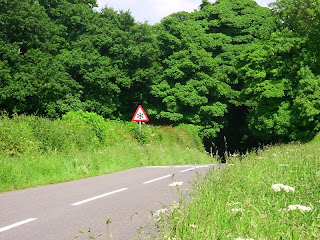