As soon as you set off from Baslow towards Froggatt Edge, you start a climb which seems to go on and on. The reward is the beautiful view which opens up around you: 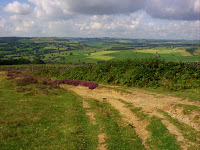 As the route levels out, the land is covered with a blanket of heather, which was an intense pink today. 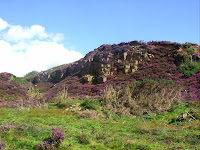 I think that this stone is called Eagle Stone. Close by is a monument to Wellington. 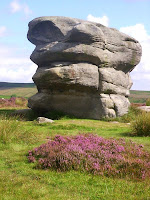 In front of us is Curbar Edge, which leads to Froggatt Edge. Once on top of the edge, it seems like a great moment to stop for refreshment and some spectacular photos. 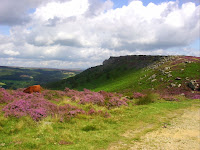 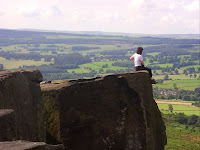 After Froggat Edge, there's a lovely walk through some woods, before joining the River Derwent to follow the well-marked Derwent Valley Heritage Trail. The sharp reflections on the water show just how still the air was today. There are some stepping stones marked on the map just before we leave the river, possibly prettier than those at Dovedale, and certainly far less busy . 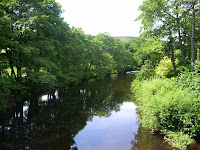 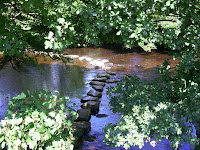 We'd intended to join Shatton Lane via Lees Farm, using the marked footpath from Westfield up to the radio mast. This was a very muddled part of today's walk. The paths between the river and Lees Farm are badly-marked (or not marked at all) and overgrown. The path goes right through the farmhouse garden, which is something I always find awkward. The planned path up to the mast isn't marked, and wasn't passable. After spending too much time trying that route, we gave up and took the road. It's known as Shatton Lane, and yes, unbelievably.... horses had been by and it had been. 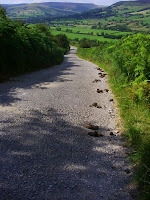 A better route may have been to leave the river earlier and use the path which goes via Offerton Hall.

This was the toughest climb, probably due to the mid-afternoon heat, but once again a good climb pays dividends with some wonderful views. In the middle of this picture is Ladybower Reservoir, the starting point for last week's walk. The light green patch just below the water is the landscaped dam, and up above is Win Hill. 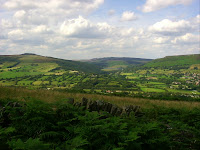 After descending and crossing a ford, a busy point where lots of paths meet, there's another climb back up to the 400m level for more views. I notice that the hills here are known as 'Lows', which seems a bit topsy-turvey, especially the one that's called 'High Low'. 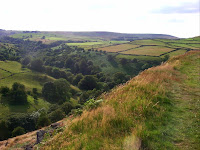 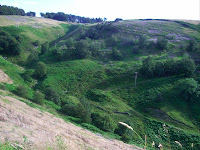 It's a very steep descent down to Eyam, famous for isloating itself when the black death struck. This ensured that the surrounding villages were spared the disease. During the plague, provisions were left by neighbouring villagers at the town's boundary stone, thus avoiding personal contact. Payment was made by leaving coins in the holes in the stone. 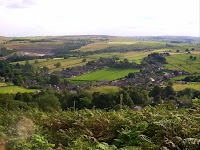 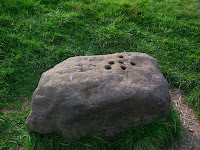 The next village is Stoney Middleton, again very pretty. The church has this unusual octagonal shape. The church is dedicated to St Martin, the 'patron saint of cripples' (yes, really). Close by are some roman baths. According to the information board, the water was marketed as being cooler than that at Buxton, and could cure such diseases as rheumatism, and 'too great heat' which is something that I suffered from myself at times today. 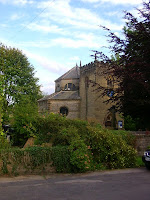 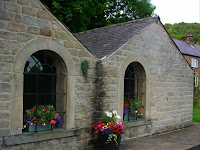 It's easy to pick up the Derwent again, for a level walk to the finish. Looking back, you can now see the edges (on the horizon) walked at the start. 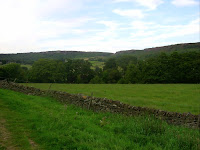 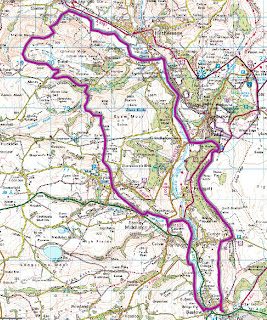 Thanks for another beautiful walk, Pea.

I loved the shat-on Shatton Lane. Heehee.
And the lovely photo of you out on the edge of the abyss.
And the pretty heathers.
And the stepping stones.
And everything else.
Wonderful as always!

It's funny you should say that! I think it depends whether you count the mucking around before Shatton Lane!

Or indeed the muck "on" Shatton Lane.

Pea OMG be careful, made me feel quite giddy looking at you on the edge of that rock......

A very detailed write up of an area I've walked many times. I agree about your description of the climb from Baslow...it never seems to end.chubac