I live in Ashby and it's been very difficult watching North West Leics council grant permission for one major development after another to be built on the green land around the town.

I could have a real rant, but local democracy [or rather, lack of] aside, there are implications for our paths. Today was the first time that I tried to use the Ivanhoe Way path leaving Ashby to the south-west since work started there. From the Moira Road you used to head across fields at around SK346166. Here's what that field looks like now: 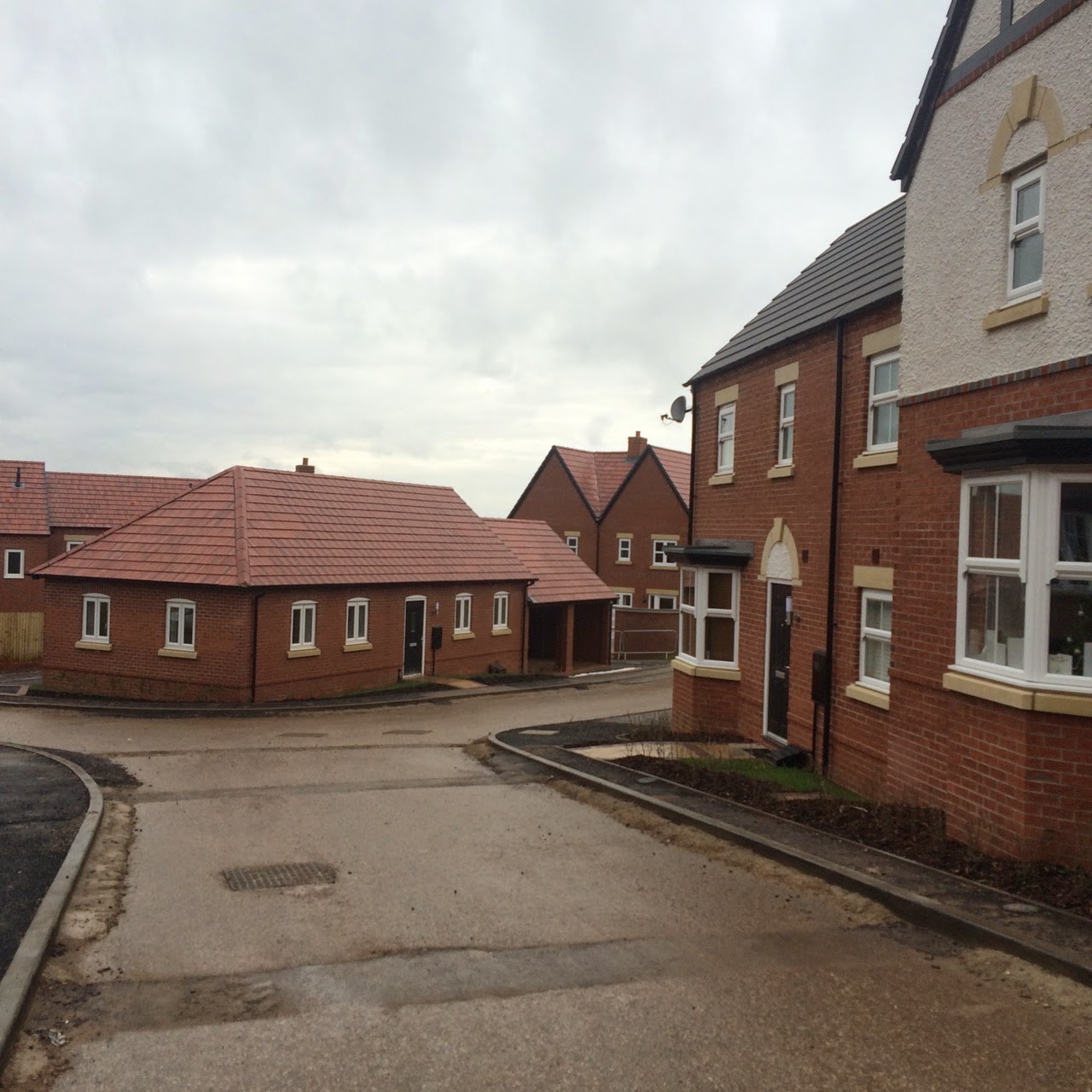 There are new houses standing on the spot that you used to enter the field. It would be fab to discover that you have the right to walk through one or more of those houses in muddy boots but I expect Leicestershire County have done the necessary legal stuff with the path.

I don't know whether it'll eventually be possible to get through this development and join the Ivanhoe Way just beyond - as I write this on 1 Jan 2015, half of this site is still a building site and therefore fenced off with no signs giving information or a detour. So the IW is blocked.

There's nothing on LCC's Ivanhoe Way page, I've written to them asking about this and will post the reply here.

In the mean time, I suggest continuing out of town on the Moira road and picking up the footpath that heads off at Shellbrook and joins the Ivanhoe Way.

It's gutting to see so much green land being built on, especially when the local people are strongly opposed to it. It's also a shame that it further spoils this long distance walk. There are already too many housing estates to walk through on this route and there will be more; there's another one imminent on the other side of Ashby (the 'Money Hill' site).
Posted by S P Dixon at 3:31 PM

I can understand your feelings Shelia, Swadlincote is going the same way, regardless of what the locals think.
I do not walk as much these days due to health problems, I still keep active as much as possible. I look back to our Summer Solstice walk with fondness, wishing I was still be able to give it another go, but sadly not a chance.
I wish you well and have a good 2015 and beyond.
Peter

Hi Peter, it's lovely to hear from you and I'm sorry you're not able to walk as much as you'd like now.

It breaks my heart to see green land being built on at such an alarming rate.`

Happy new year to you and Carol. x

Thanks for this info - always useful to know. I know people have to live somewhere, but it's happening over here in Corby as well - at quite a rate!

Thanks for the comment aliqot. Your comment about people needing to live somewhere is an interesting one.

The other day I read about a campaign called something along the lines of "where will our children and grandchildren live?" The simple answer to that is "in the houses 'vacated' by our grandparents and great-grandparents". ie as long as the population is stable then we don't need to build any more houses, there will always be enough.

Personally, I think there are already way too many of us. But even if you don't agree with that, no-one can disagree that the population (local or global) can't grow forever. At the very least it has to level off sometime.

I'm not advocating slaughter of the firstborn or even a Chinese-style one-child policy (they are seeing the downside of that policy now) But a stable population could be achieved very simply with a few quite reasonable policies including a low net migration. Building houses is catering for an increasing population rather than discouraging it.

One problem is that developers make a shedload of money from building on our green land and so pressure from them is immense - I know, I've been to planning committee meetings and tried to oppose developments like this.