Today's important lesson was that making plans to stop and enjoy lunch / coffee at a viewpoint only works if it's a nice day. Today was a cold and breezy day, with some late snow sprinkled around. On a day like this, somewhere sheltered is a much better bet.

Having planned to have lunch on the Markfield viewpoint, we didn't spend long up there, and retreated to the church below. Even there I got very cold and wanted to press on to warm up.

This is a variation of a walk I've done a couple of times before, and called the 'Leicestershire 3 Peaks Challenge'. That's a bit of a joke name, as the 'peaks' aren't really very dramatic Leicestershire is pretty flat. (I enjoy saying that as I've spent my life railing when people claim that Norfolk, my homeland, is flat. It isn't!)

I noticed before that there are other viewpoints marked on the map nearby, so this could easily become the 5 or 6 Peaks Challenge. I'm intrigued about why there are so many viewpoints clustered in a small area. Today we started in a different place; the lay-by on the A511 is convenient but not a pleasant start / finish to the walk. 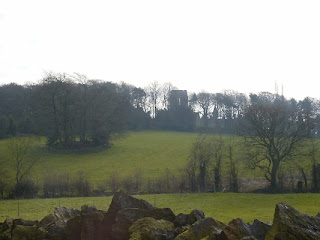 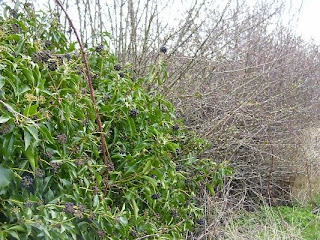 The car park just through Whitwick was much better. There's a short walk along a road before Mount St Bernard Abbey. The monastery may be worth exploring, but we didn't make time today. Just past the abbey, you can take a footpath to the right and cross a reservoir dam. Footpaths take you to Ingleberry Lane, but there's then a couple of miles to do by road before coming to Beacon Hill.

This is the current beacon. Strangely not near the top of the hill... Apparently you can see the one on Breedon Hill from here, but we couldn't spot it today. It was a bit misty, and the strong breeze made it uncomfortable trying. I'll try to get a small pair of bins, I think. 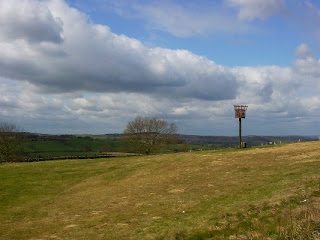 This is the top of Breedon Hill. A really good view, but as expected there were lots of people on top, thanks to the car park close to the summit. 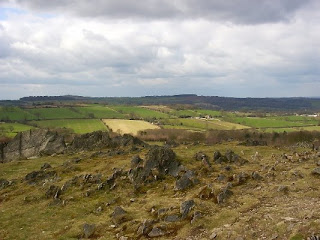 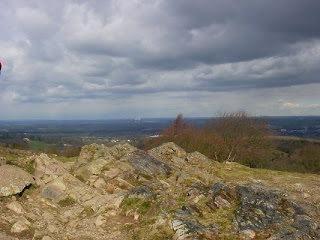 After Beacon Hill, we're back on footpaths, past a 'Priory, Rems of' (it sez on the map) which looked as if it was being converted or restored.

These were my first gamboling lambs of the spring. 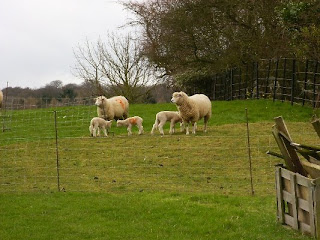 The road sign opposite says 'Polly Botts Lane' which is a delightful name. Take it, and 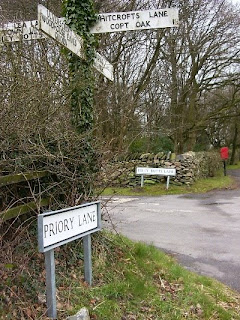 This was today's surprise. We included the Quarry at Markfield (Hill Hole Quarry) as it has a viewpoint marked on the map, and it delivered on that promise. As you can hear in the video below, (turn your sound down before pressing 'play') it was cold and windy up there, but it has a very good 360 degree view. You can see why it's called Hill Hole - The water is where a hill used to be. It's as if the hill has been turned upside down or inside out:

I've written about Bardon Hill and Billa Barra before. We approached it from a slightly different direction, so this is the view of the 'crown' of trees on Billa Barra from the 'back': 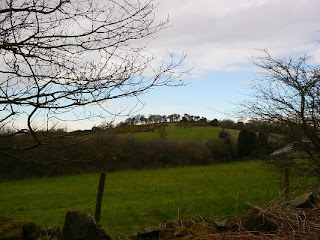 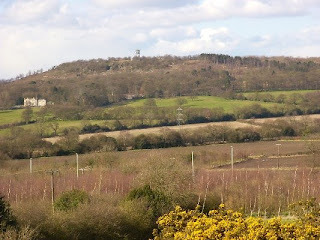 You can pick up the Ivanhoe Way to get to the top of Bardon Hill and then follow it all the way back to the car park. 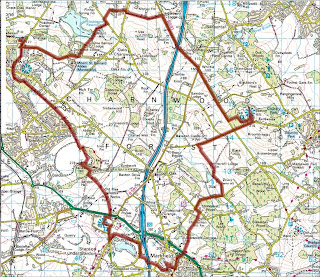 
I'm walking as if I've just got off a horse. A couple of weeks ago I did 27 miles over two days and so thought that I'd manage 22 with no problems. Once out there, I couldn't resist a detour to see Anchor Church Caves which boosted the distance a little, and the last couple of miles were a little bit tortuous.

First thing this morning, when I left the house, there was a hint of spring in the air. It was early, but the sun was high, Despite the chilly air, it didn't feel quite so wintry. This feeling didn't last long, The sun stayed out for half of the day, but the air was chilly. Note to self - During March, it's worth taking gloves - they're not too heavy to carry if you have to take them off.

The weather deteriorated during the day. Towards the end, the sky was decidedly heavy.

Some good nature watch photos today. Things are starting to creep out blinking into the sunlight. 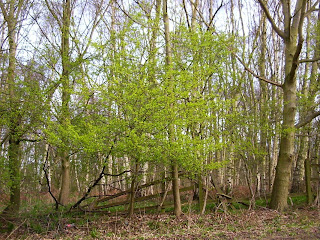 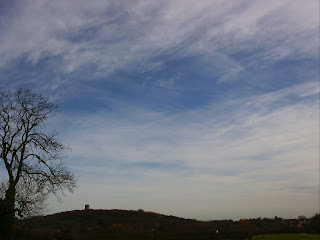 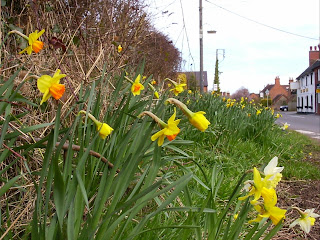 This chap was quite tame and let me take lots of photos quite close. 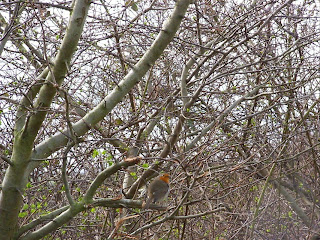 This was quite a common and wonderful sight today - the green is hawthorn and the white is blackthorn (yes, really). The former is one of the earliest leafing shrubs, but the flowers don't come out till later (May, which is why it's sometimes called Mayflower). Blackthorn comes out in flower first before it shows its leaves. 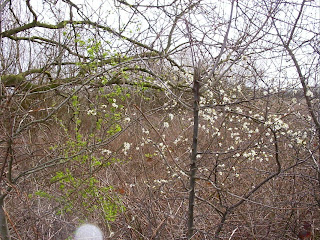 Oops - sideways. Unless I'm mistaken, these are fairly fresh deer tracks (and the odd bootprint). 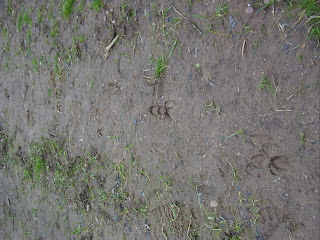 I couldn't resist recording this woodpecker doing its thang. The views here are great too - just past Anchor Church you climb up quite high and have a good view over the river.

This is the bridge over the Trent between Willington and Repton. A lovely bridge, and one of few crossing points. The impressive spire of Repton church is in the background. 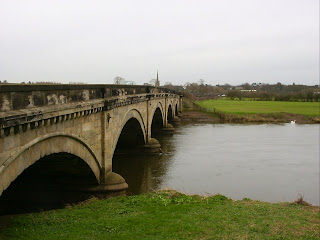 These caves are known as Anchor Church - read back through this blog for more info. 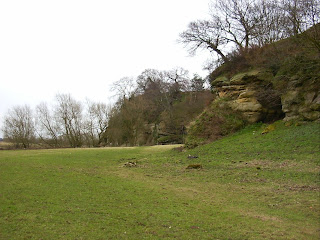 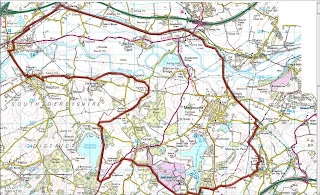 We just needed a local 12 miler to walk up an appetite for dinner. A variation of my 3-viewpoints fitted the bill. Daffs are out - yay. 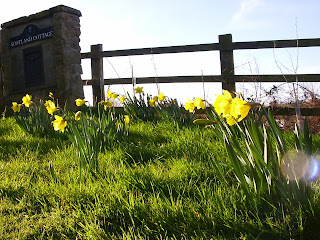 Posted by peahen at 1:33 PM No comments:

I've walked this route a few times now. any route looks so different at different times of the year. Today was a bit dull and grey at times, but leaves and buds are starting to appear. I find this such an optimistic time of year. 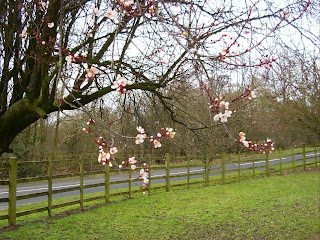 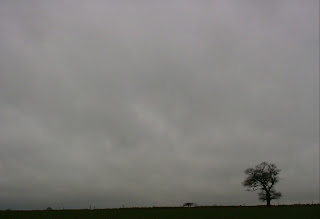 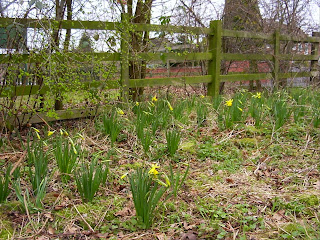 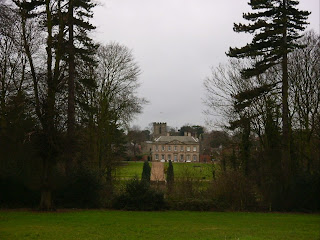 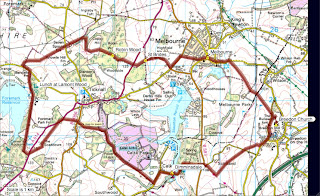